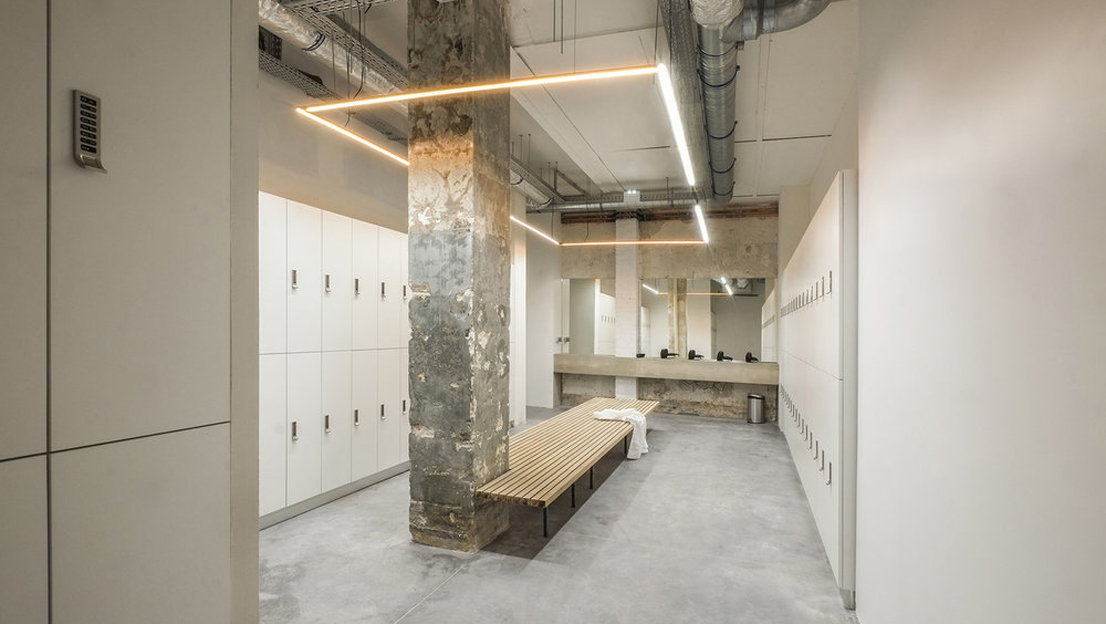 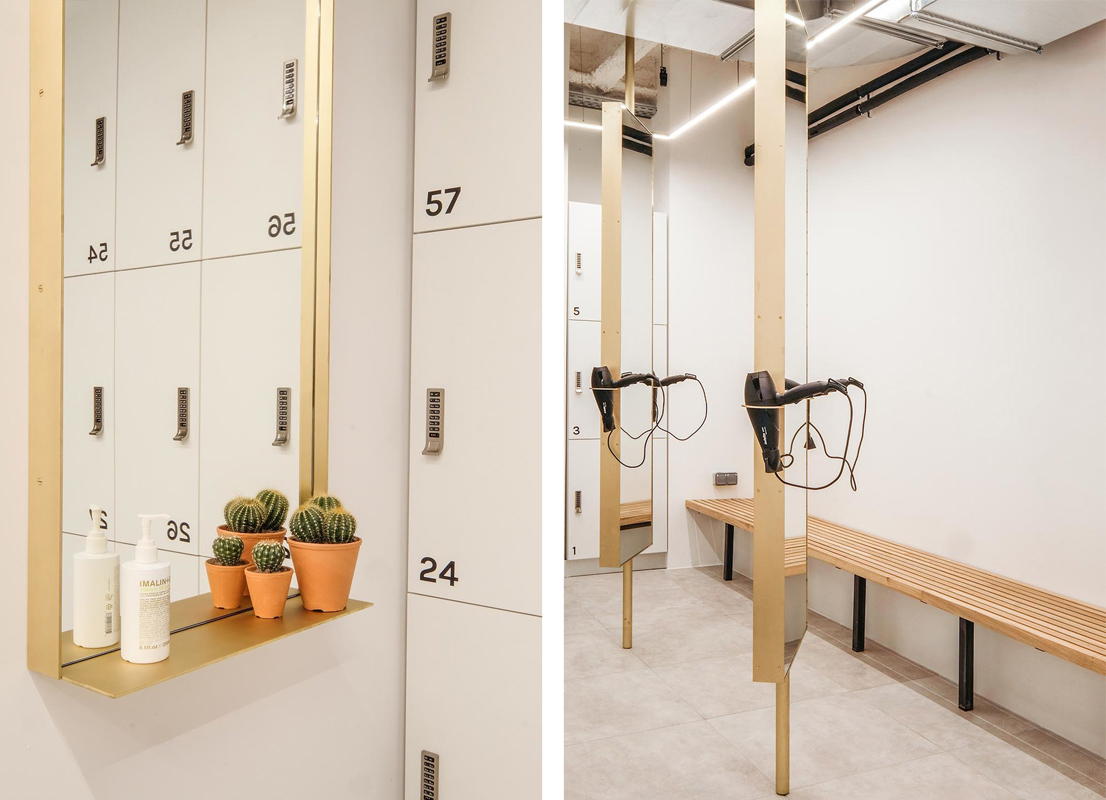 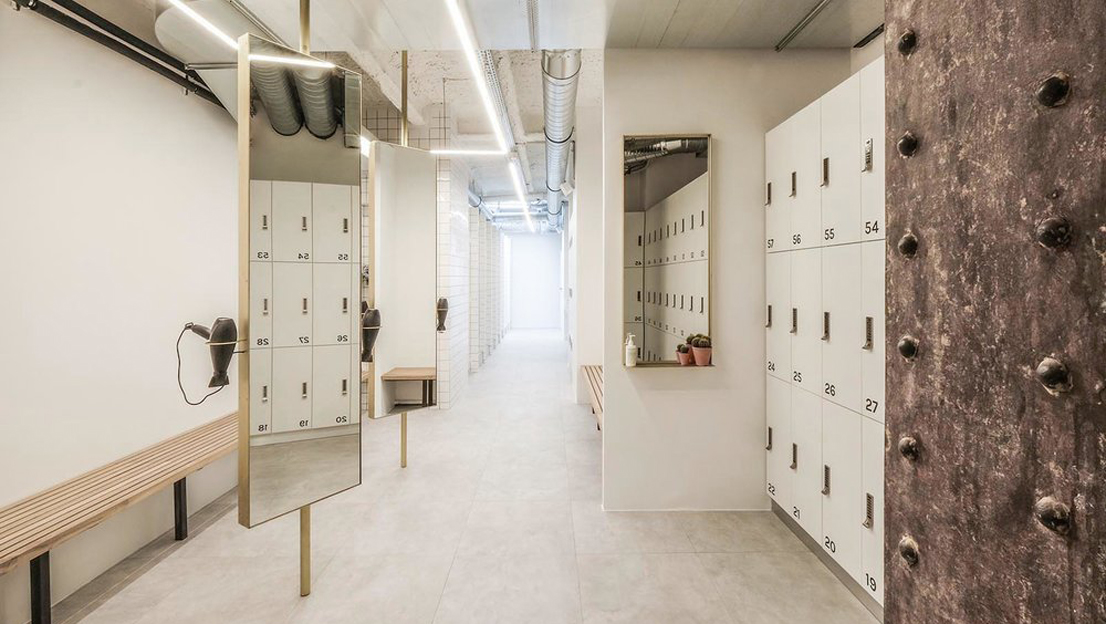 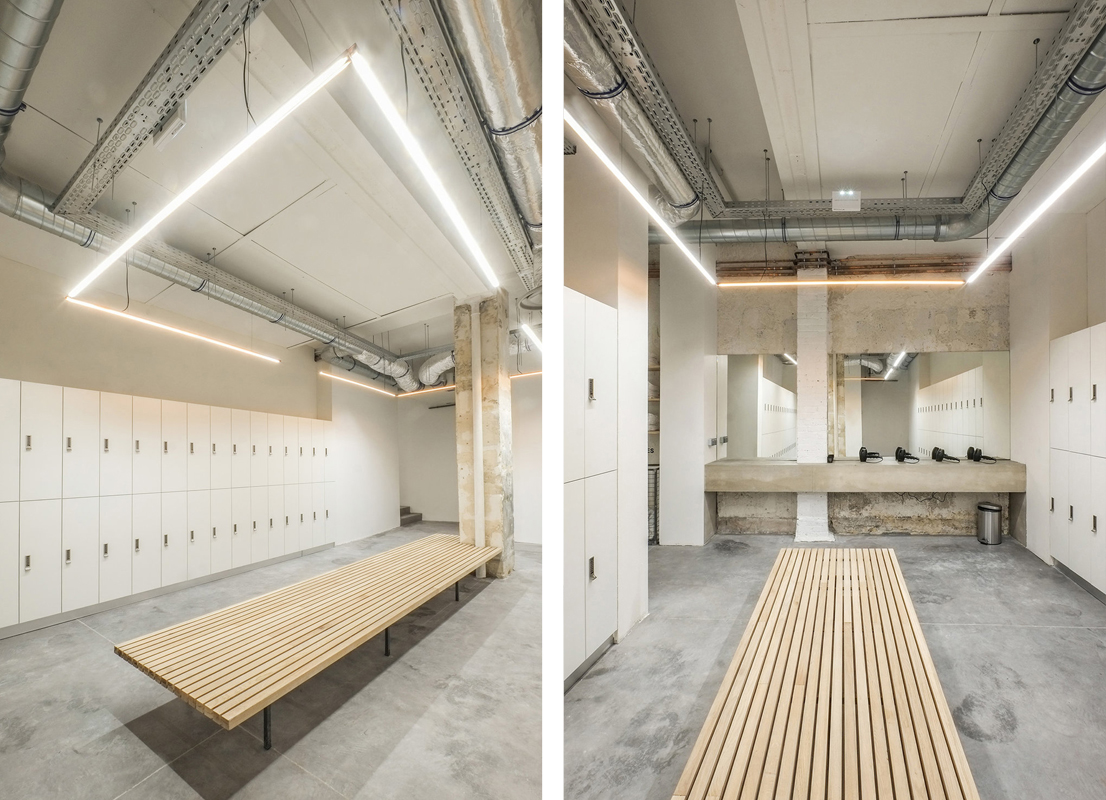 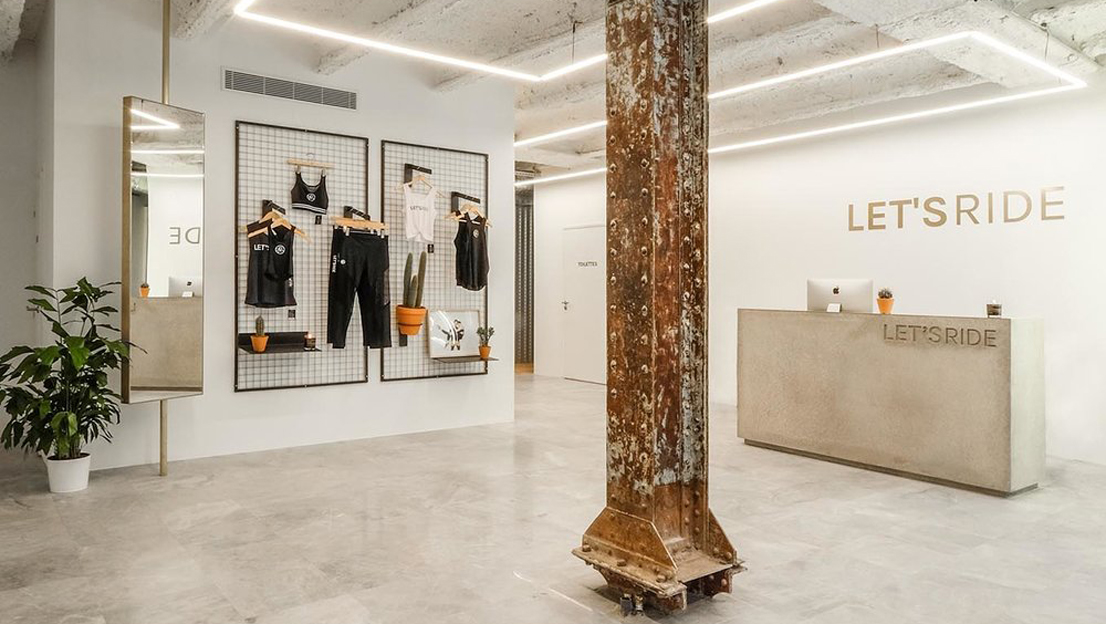 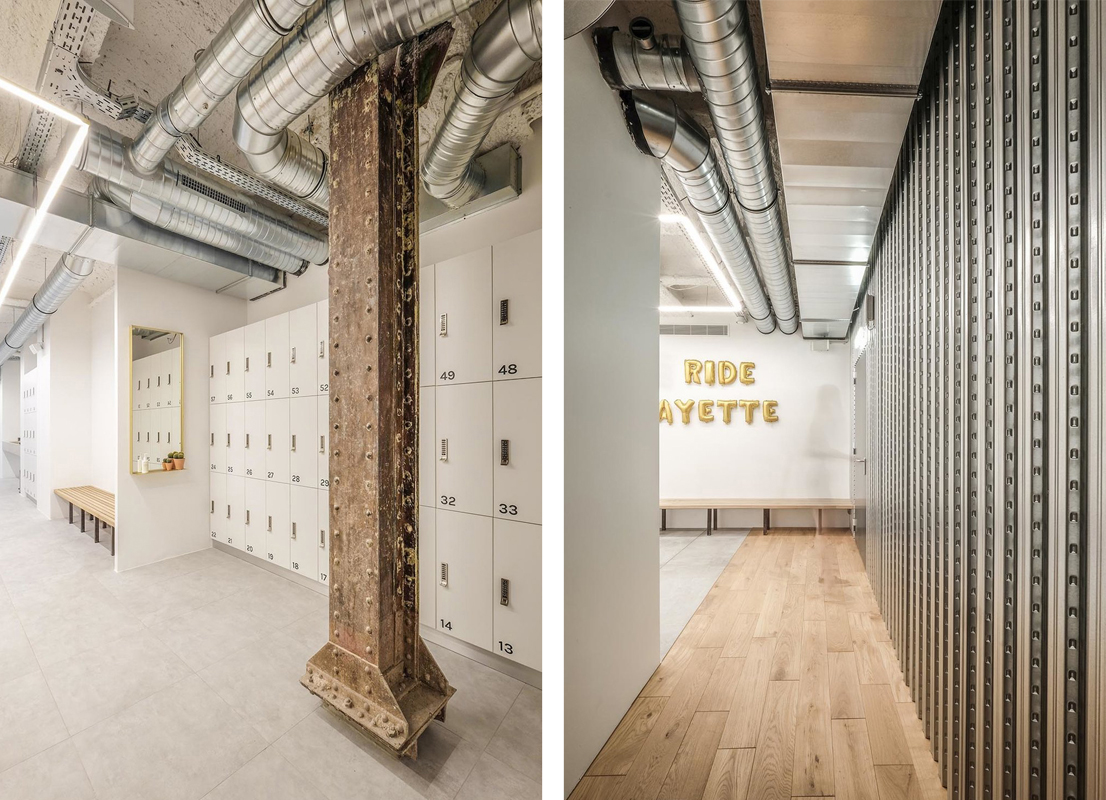 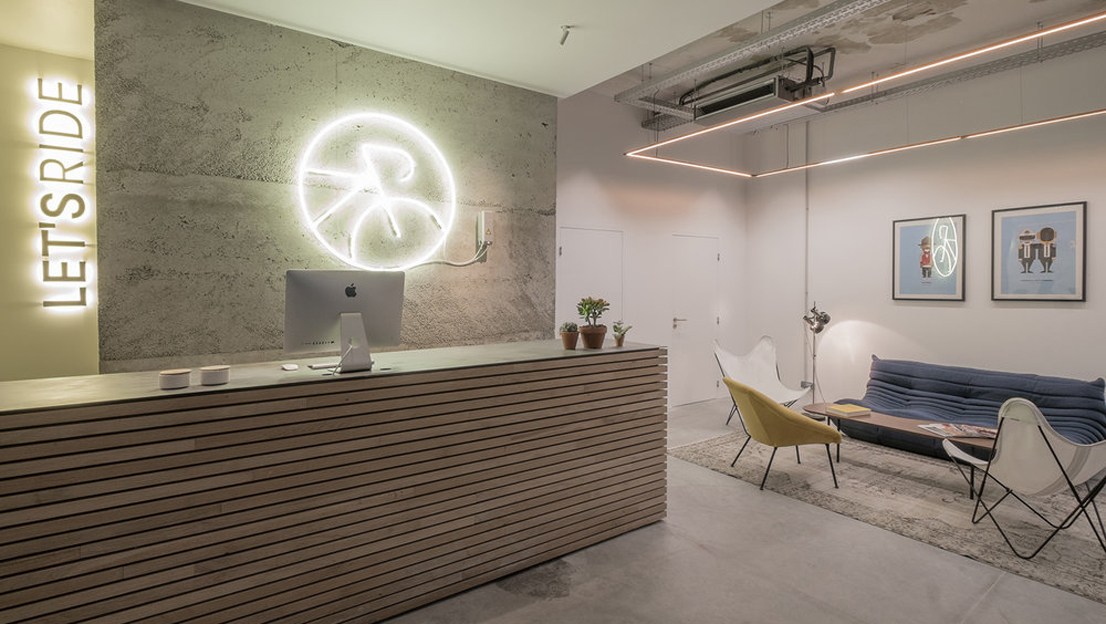 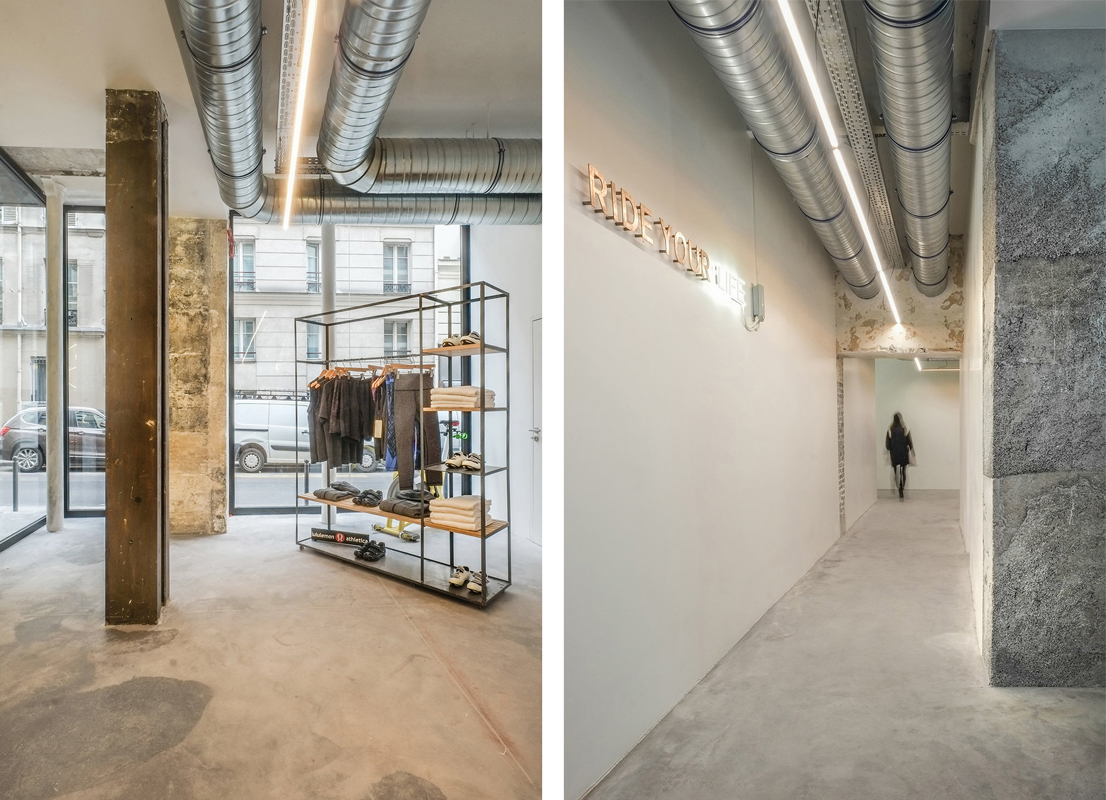 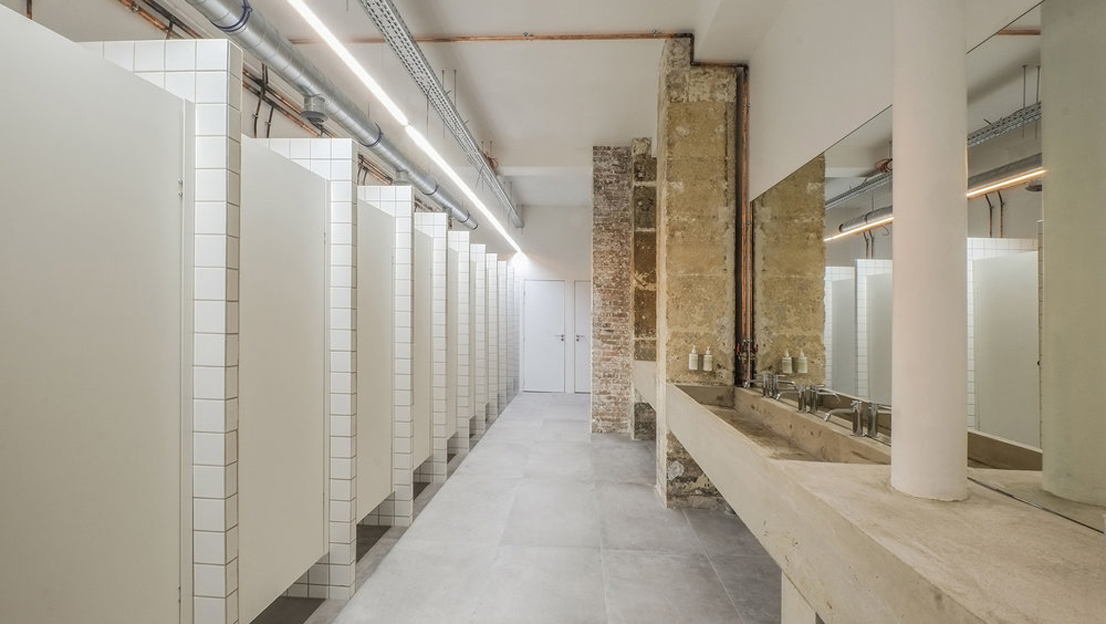 Ride and Let’s Ride are two specialist indoor cycling studios. The first is called Ride La Fayette, and the premises had earlier housed a paper press, and later a bank. The building was originally built in an Eiffel structure, which has been preserved in its raw form. The LED lighting engineered by DAS-studio surrounds the structural parts. It makes the inner space glow with light and warmth. The brass mirrors in the changing room vanities are a revisited version of the traditional French “coiffeuse”, with integrated hair-dryers. The reception counter, designed also by DAS Studio, is made of real concrete. The Let’s Ride club has also been designed under the same style concepts. All the pillars here were also taken back to their original raw form, and are visible and central in the small and simple changing rooms, where lockers are lining the walls, and an oversize bench takes center stage. The reception counter is made with horizontal wooden slats.

The following panel allows you to disable the individual parts in relation to the activities described below. To learn more, refer to the cookie policy. You can change your choices at any time.
NECESSARY Always Enabled
These tracking tools are strictly necessary to ensure the functioning and provision of the service you have requested from us and, therefore, do not require your consent.
FUNCTIONAL
These tracking tools enable simple interactions and features that allow you to access certain resources of our service and allow you to communicate with us more easily.
ANALYTICS
Analytical cookies are used to understand how visitors interact with the site. These tracking tools allow us to measure traffic and analyze visitor behavior with the aim of improving our service.
ADVERTISEMENT
Advertisement cookies are used to provide visitors with relevant ads and marketing campaigns. These cookies track visitors across websites and collect information to provide customized ads.
PERFORMANCE
Performance cookies are used to understand and analyze the key performance indexes of the website which helps in delivering a better user experience for the visitors.
SAVE & ACCEPT
Powered by